Edward's workshop is a variant on the eggdrop challenge with extreme restrictions designed to force students into taking their time to really think about the design they want to implement before executing it. This teaches the students how to solve problems with limited tools and under tight restrictions.

Edward Ah Kee is a director of the media agency Iscariot Media and an Information Systems student at the Queensland University of Technology. His work and education has mostly revolved around issue identification and picking holes in solutions. 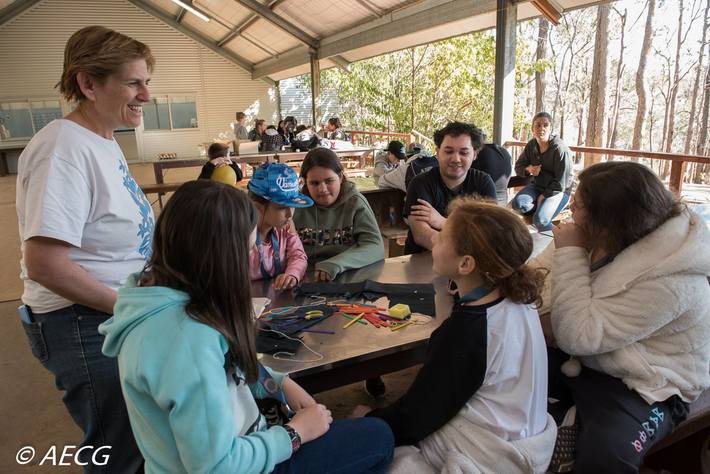 Raymond's workshop entails old style learning, the knowledge he passes on is knowledge that he does not have a certificate for it’s knowledge that has been passed down through oral history, the amount of knowledge Ray teaches in a session depends on the level of respect, as this knowledge needs to be earnt. Ray brings his  own artefact kit with tools and weapons of our ancestors and talks about practices and protocols within Lore.
Raymond Timbery is a 26 year old Dharrawal Jaitmethang man connected to the South East Coast of Australia, Ray practices culture on a daily basis, teaching culture is his passion and his purpose in life. 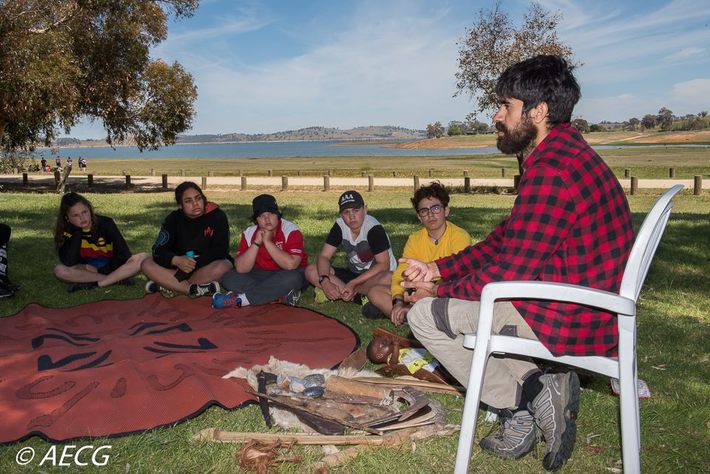 Music plays a major role in Indigenous Australian societies. As well as being a vital part of sacred ceremonies it is also part of everyday life. Music is linked with a person's ancestry and country and is 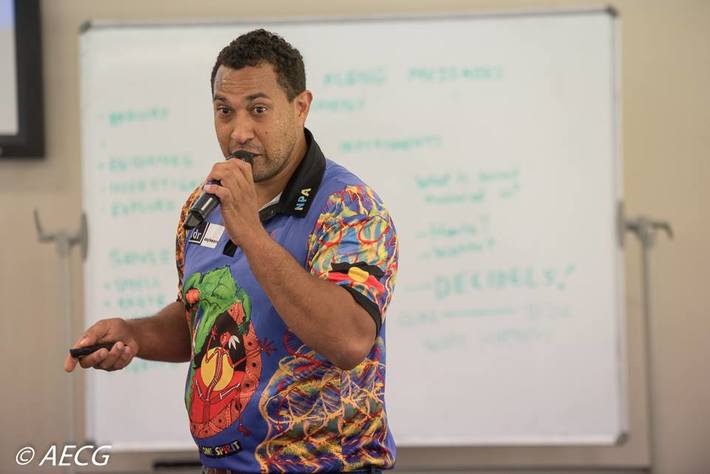 used throughout life as part of Indigenous oral traditions to teach what must be known about culture.  Children, women and men of different ages have their own songs which are performed in specific contexts. Young children are encouraged to dance and sing about everyday events.

For Torres Strait Islanders the gorr/kulap (rattle) is an integral accompaniment and performance instrument used to perform traditional dances at social, cultural

and sacred ceremonies. The gorr/kulap is made of seed pods strung together in the Torres Strait from the match box bean. The bean grows in a pod usually found in rain forested areas or also washed up along the beach shore. The science understanding developed using this context is the particle and wave model of sound energy transfer.
Torres Webb known for his work in promoting the power of positive relationships in educating future generations regardless of economic and social circumstance. Securing equity, inclusion and social justice for every person and child in today's world requires an active partnership for learning across school and community, supporting and guiding educators to understand their purpose and role in new ways.

Torres Webb, a proud Far North Queenslander and Indigenous man from the Torres Strait, is a passionate parent and community engagement advocate in improving the achievement, well being and life chances of all children and youth by focusing on "what's strong rather than what's wrong". He is recognised nationally and internationally for his community engagement and leadership skills. Having worked with Youth Challenge Australia in Vanuatu, Asia Pacific Indigenous Youth Network in Philippines, Queensland Youth Parliament and with Oxfam International Youth Partnerships in India, Torres has also held a Deputy Chair on position on the Erubam Traditional Land and Sea Owners Native Title Body, where he worked closely with the local rangers and elders. Currently leading an Indigenous STEM Education project in Far North Queensland valuing Indigenous knowledges within the science curriculum.Torres previously worked with the Queensland Department of Education assisting Indigenous communities to connect with their local school to foster identity, culture and learning outcomes for all students. Through a close working partnership with Dr George Otero. Torres is currently editing a book as an associate to the Centre for RelationaLearning titled: Handbook: connecting school, family and community. Gabrielle's workshop - How Long is A Peace Of String? With a looped piece of string you can weave Aboriginal and TSI String Finger Art Shapes, bee introduced to our stellar worlds and create perfectly ancient circles and sacred geometrical artworks congruent with our anatomy, galactic mathematics and quantum physics principles. Welcome to The Art Of String Theory, bringing Dreamtime and Mathematics together through String Finger Art. String, Sticks and Ochre are still our greatest teachers of Culture and Mathematics. Come and See How.

Garbrielle Quakawoot has been a String Figure Artist all her life. She played this Art from with grandmothers, great aunts, aunts, great uncles, uncles, cousins and other school children. While still in infant school, String Figure Art introduced Gabrielle to what is now known as Sacred Geometry. Following her artistic passion, Gabrielle has and is continuing to derive forms of Cultural Mathematics and more recently, Tribal Mathematics from String Figure Art.
Gabrielle Quakawoot has a Post Graduate Certificate in Natural, Cultural and Environmental Heritage Interpretation from the Institute of Koorie Education. She has also studied Indigenous Environment and Caring for Country II and III in the Mackay Area. Gabrielles’ matriarchal lineage is Byalli and lives her dreaming now through her business, The Art Of String Theory. Kargun Fogarty is an expert teacher of Aboriginal culture and knows the importance of this education for Aboriginal students. After listening to Dr Chris Matthews talk about Maths as Storytelling, Kargun immediately saw the connection between maths and dance and using dance to teach mathematical concepts to Aboriginal students. Through the AECG STEM Camps, Kargun continues to develop the idea of maths and dance, which he now calls Corroboree Equations, as well as other STEM activities based in Aboriginal culture.

KARGUN FOGARTY or Moojidi (Sand Goanna) is a Man who identifies with the Mununjali Language group and the Guwamu Language group - with Connection to Jagera and Kutjela Language Groups- He has been Practicing and Performing Traditional Song and Dance since he can remember. He has performed locally Nationally and Internationally - at places such as Canada, Japan, New Zealand, Scotland, Italy Ireland and so on - Performing at many events Festivals and Groups- He has performed at literally hundreds if not thousands of Schools in Australia. He is Committed to the Education and Continuance of his Culture. He has worked as an Indigenous Education Support Officer and as apart of the Parent and Community Engagement team. He currently has around 80 - 100 Traditional Dance Students in different locations around South East Queensland. 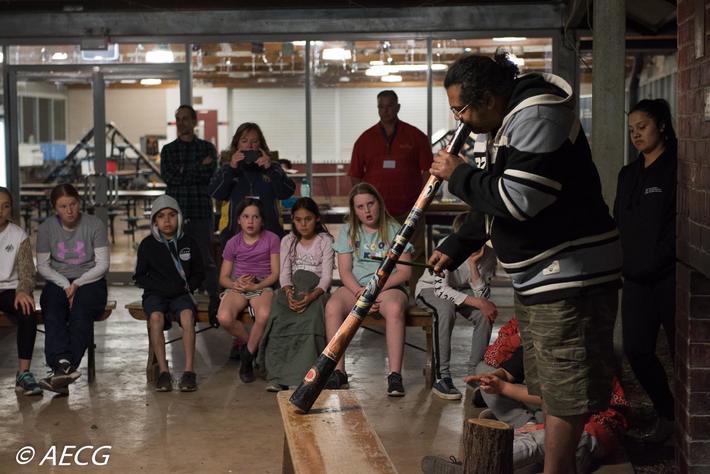 ATSIMA would like to take the opportunity to introduce presenters who present workshops on behalf of ATSIMA around the nation. 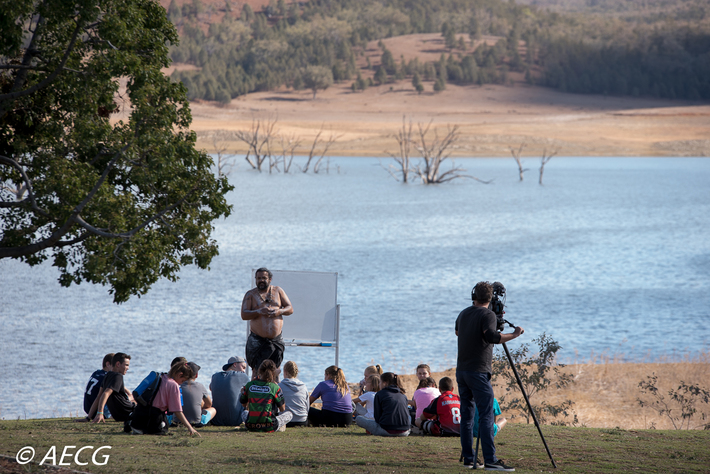